Most Innovative use of Science & Technology 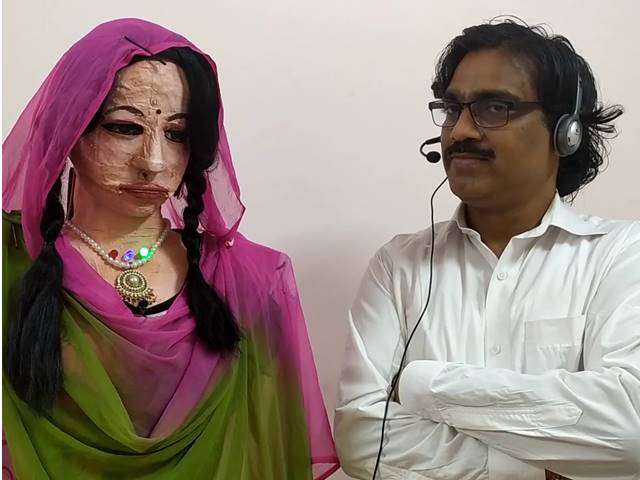 Mr Dinesh Patel is a computer science teacher at Kendriya Vidyalaya, IIT Powai, in Mumbai. This young teacher has turned into an innovator and has developed a fully operational Social Humanoid Robot named ‘Shalu’. Despite his humble background and limited resources, this young innovator has translated his imagination into reality and developed the “Shalu” Robot using spare parts commonly available in the local market. What started as a hobby in free time, took the form of a passion project giving shape to the "First social humanoid Robot of the world that can speak 9 Indian and 38 foreign languages".

Most of us as kids would remember seeing ‘Small Wonder’ an American comedy science fiction sitcom, in which a robotics engineer secretly creates a robot modelled after a human girl and passes it off as their adopted daughter, ‘Vicki’. Well, Mr Dinesh Patel, a teacher by profession shares openly that he has developed a fully-functional social humanoid robot called ‘Shalu’ right at his home!

The three-year project, which started as a hobby after being inspired by Superstar Rajnikant starrer ‘Robot’, has culminated into the development of a fully functional humanoid robot that can mimic human responses and emotions. During the developmental process, Dinesh faced several challenges, the prime being availability of advanced spare-parts to develop the robot. But like all great educators, Dinesh saw an opportunity in adversity and developed the robot using common parts available at home and in the local market.

Recently, during the lockdown, Mr Dinesh has enhanced Shalu and equipped her with additional features and functions. Being a social humanoid, Shalu is a lovely soft-spoken, multi-talented, multi-lingual Robot. She is capable of speaking 9 Indian languages (Hindi, Bhojpuri, Marathi, Bangla, Gujarati, Tamil, Telugu, Malayalam, and Nepali) in addition to English along with 38 foreign languages viz. German, Japanese, etc. Moreover, being a humanoid, it was important to ensure that Shalu mimics human behaviour and emotions. Recently, Dinesh has programmed Shalu for the same and she is now able to respond in the same manner as a human being including shaking hands, laughing or showcasing anger and irritation.

Among other features, Shalu has also been equipped with a facial recognition functionality using which “Shalu” can remember a person after meeting them, just like a normal human being. “Shalu” can read news from newspapers, read horoscopes based on an individual’s date of birth, and also predict or forecast weather for the next 10 days for any location! She can also tell jokes to keep people entertained and also have a casual social talk as per predefined content using Artificial Intelligence by understanding the meaning of the conversation.

Shalu as a Learning Companion

Being an educator at heart, one of the key functions that Mr Dinesh integrated with Shalu is that of being an ideal Learning Companion. She is capable of understanding simple math questions as well as equations and answers such as Time-Speed-Distance, Simple/Compound Interest, equation calculation, LCM/GCF, Factors, Prime numbers, Armstrong numbers, etc.“Shalu” is also capable of giving lectures and presentations in the classroom or seminars and is capable of answering educational questions based on Physics, Chemistry, Maths, History, Geography, GK, etc, that students usually ask while studying in the classroom.

We live in the age of Machine Learning and Artificial Intelligence, but very few among us come close to understanding how these technologies work. On the other hand, Dinesh Patel’s effort to not only understand these finer details but to employ them to develop his very-own humanoid robot is commendable. In addition, he had to overcome several challenges in his journey to bringing Shalu to life, be it finding the right space or the time to execute such a complex project. His invention is not only a technological marvel but will also go a long way in inspiring others to innovate in the face of challenges.