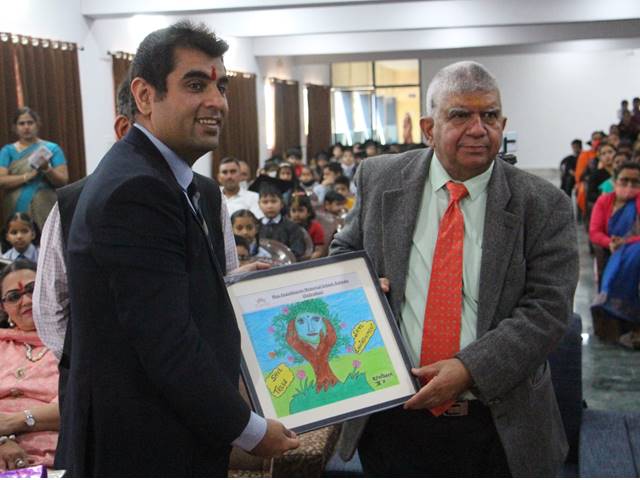 Digitization being the next big thing in education reforms, the Government's initiative of Atal Tinkering Lab (ATL) is also a major leap in the Indian education system. However, what make this initiative a real game-changer is the schools and teachers who inclusively implement these initiatives at the grass-roots level. Arpit Panjwani, Director of MaaAnandmayee Memorial School acknowledged the government’s efforts to establish Atal Tinkering Labs all over the country and established the same at MAMS, the school established in 1985 with a social cause to help people displaced due to the Tehri Dam impact.

It is an established fact that school education is the foundation years of a child's career graph. Therefore, schools adopt new learning methodologies and techniques, focusing on skill development and physical development. MaaAnandmayee Memorial School, situated in the heart of a forest grove on the Haridwar-Rishikesh Highway is also doing its bit. It is the only innovative educational hub in the vicinity of a few kilometers from the Rajaji Tiger Reserve. The school was established in 1985 by the founder Shri Ram Panjwani to meet the educational aspirations and social needs of the people displaced due to the Tehri Dam impact. The villagers needed a mainstay of occupation and a source of education to enhance and upgrade their wards and look after their own livelihoods. The school served both these purposes.

35 years later, technology and Innovation are now the buzz-words in the education sector but were found missing in the small sleepy town of Raiwala. This is when Mr.Arpit Panjwani, Director of MaaAnandmayee Memorial School established the Atal Tinkering Lab (ATL) at MAMS. After the lab was set up, the Social Innovation Movement was launched through the Atal Tinkering Lab at MAMS.

SakshiBadoni, a student of class X took the initiative and made a project for an early ‘Flood Alarm’ system. GohriMafi is a low lying flood-prone village where the school is situated and Sakshi also resides near the river Tsong which usually overflows. Understanding the imminent threat, she conceptualised the idea of a flood alarm system. Her project drew acknowledgement from the Hon’ble Governor of Uttarakhand, and also supported her candidature for Yuvika, ISRO’s Young Scientist programme.

Sakshi and Ayush both won a scholarship through the Inspire Awards - Manak, an initiative by the Department of Science and Technology (Govt. of India).

Apart from this, TEDxYouth@MAMSRaiwala, an event of international dimension was organised by the Atal Tinkering Lab team at MAMS. Robotics and coding sessions are also organised by MAMS that provide students across the country an opportunity to imbibe contemporary skills such as creativity and collaboration along with practical DIY sessions on coding, mobile application development, 3D Modelling, etc.

For more information about the work and initiatives, you can browse through the following links:

Arpit Panjwani is a finalist for Best Initiative - Grassroots Service Because…

A school and its teachers are looked upon to shape a child’s future and are entrusted with the responsibility of identifying a student's potentials and capabilities, to provide him or her the right kind of guidance and resources. Mr.Arpit Panjwani’s efforts for the best usage of technology to impart education in a remote part of the country is inspirational and will prove to be a game changer for a country like India, where a large percentage of people do not have access to even basic education.