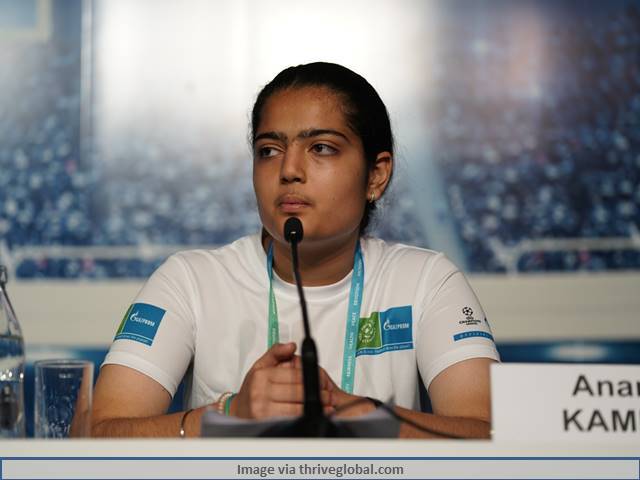 Seldom do we come across youngsters whose achievements outnumber their years, but for Ananya, a journalist at heart, this statement stands completely true. From being selected to be part of a global friendship initiative at the age of 13, to being an author by the time she turned 16; Ananya has garnered many laurels and accolades in a short time span. This ardent Lionel Messi fan has addressed contemporary global challenges such as climate change while also using sports to promote gender equality and women empowerment; she is certainly creating an impact!

Using Sports as a Medium of Social Change

Ananya’s journey as a young change maker started in 2017 when she was selected as ‘Mission XI Million’ through an essay writing competition. Since then, she has represented India as part of Football for Friendship (F4F) programme, an international initiative that brings together children from over 60 countries to cultivate respect for different cultures and nationalities through football.

After being selected to be part of Football for Friendship (F4F) programme, Ananya has been using sports as a medium of social change while 'enabling conversations', which could help soothe tensions and foster engagement between countries and people across the globe. She believesthat sports have the power to bring people from diverse backgrounds, races, ethnicities, cultures and countries closerand bind them together.

She has also used sports to start conversations around how the unspoken evil of gender discrimination has plagued sports. As part of the Football for Friendship (F4F) programme, she started getting involved in various campaigns and empowerment initiatives and became a vocal advocate for gender equality and women’s empowerment.

Authoring a Book on Her Journey

Asher efforts in using sports as a uniting factor and spreading awareness aboutgender equality started getting noticed, Ananya decided that it was time to pen down her message in the form of a book titled “My Journey from Mohali to St. Petersburg’. The book is an anthology of twenty-one stories through which she shares her learning and experiencesduring the F4F programme. The book focuses on fundamental human values of friendship, equality, fairness, health, peace, devotion, victory, traditions, and honour that sports teach.

During the pandemic, she has participated in various other empowerment projects like Girl Up, Girls with Impact, Lean In India, SDGs For Children, SDG Choupal, World Literacy Foundation, and She's Mercedes. Apart from this, she has also been invited twice by the United Nations to share her views on Football for Friendship programme. On similar lines, she has also been a goodwill ambassador of BRICS countries. Previously, she has also been invited by International Children's Games (ICG), an International Olympic Committee-sanctioned event to speak on peace, friendship, and youth empowerment during the opening ceremony in Ufa, Russia.

Ananya is also working on the launch of a unique initiative under the banner ‘Sports to Lead’. The programme aims to help girls and women understand their rights and overcome gender inequality. Through a series of workshops and awareness sessions, Sports to Lead programme will empower young girls to fight discrimination and gender inequality. The programme aims to bring to light several challenges faced by female sportspersons in India, including lack of infrastructure, sexism, lack of contracts, fewer matches, low wages, a dearth of broadcast slots and lack of popularity.

Ananya Kamboj is a finalist for Special Award (Popular Choice) Because…

In India, where traditional vocations are still considered to be viable career choices, Ananya has chosen for herself, the road less travelled. She has already been a ‘young journalist’ as part of the Football for Friendship (F4F) programme and plans to continue her passion in future as wellas she takes on Contemporary Global Issues while Winning Hearts and Minds.